Welcome to the Irish Society of Physicians in Geriatric Medicine Website. The society is the primary physician advocacy body for the care of older persons in Ireland, representing over 130 geriatricians, the largest branch of internal medicine in Ireland. Geriatricians in Ireland are involved in a broad range of care services, including acute geriatric and general medicine, ambulatory and integrated community care, acute and rehabilitative stroke care, memory/dementia services, orthogeriatrics, falls services and long-term care. The ISPGM was one of the societies initiating the European Geriatric Medicine Society in 1999 and hosted its congress in 2010 in Dublin.

We engage with a broad perspective on ageing and the gerontological sciences, promoting the concept of ageing as the longevity dividend, and gerontologically-attuned care a key guardian of this dividend. We have contributed submissions already in 2021 to the Oireachtas Committee on legislation to introduce physician-assisted suicide and euthanasia Submission to Oireachtas Committee, as well as on concerns over weighting of private health insurance against older people HIA Risk Equalization Older People,  as well as welcoming the introduction of the COVID-19 vaccine, with this statement issued on 4 Jan 2021 ISPGM COVID Vaccination.

The Dr Michael Hyland prize commemorates a founding Chair (1979) of the ISPGM and consultant geriatrician in St Finbarr’s Hospital and Cork University Hospital.  It will be awarded annually to medical students (under and postgraduate) in Irish universities for the submission of an essay on a subject pertinent to older people or ageing and related conditions from a medical, biological or sociological point of view. This will be an annual open competition with the topic being selected by the ISPGM committee in advance and submissions welcomed by January 17th of each year. Volunteer adjudicators will be sought to judge the submissions with the winners announced in May of each year. The award will comprise a medal (first placed student) and prize money of €850 will be divided among first (€500), second (€250) and third (€100) placed students.  – Details of competition are on our News and Events Page

The first ISPGM Journal Club will be launched on Friday the 29th of October at 13.30. It will be hosted virtually on Zoom and will last for no more than 30 minutes. It will be run on the last Friday of the month (except December) at same time each week.
Modeled on the successful Toronto Geriatric Medicine journal club, each meeting will discuss a single paper with more of a focus on methodology than clinical cases or topics.
Each ISPGM Journal Club will be moderated by the co-ordinating SpR for the year with consultant support for the audience being provided on our Twitter account (https://twitter.com/ispgm) – discussion points and Q&A before/after.
Hosting duties will rotate through each hospital over time with larger hospitals expected to rotate more frequently with one SpR coordinating for the year. There will be approximately 9 meetings during each academic year with breaks in July and August and over Christmas/New Year.
Ideally, final year SpRs will take the lead and present .Papers will be selected in advance in conjunction with the ISPGM executive. Details and the planned schedule will be posted on the ISPGM website (http://ispgm.ie/?page_id=9) and our Twitter feed (https://twitter.com/ispgm) in the week preceding the meeting.
For the inaugural meeting, Mercy University Hospital, Cork will present the recent paper by Cassarino et al., (2021; https://journals.plos.org/plosmedicine/article?id=10.1371/journal.pmed.1003711 ) at 13.30 on the 29th October 2021 – A Zoom link will follow shortly.

A unique development in Irish geriatric medicine is an anthology of poetry and prose celebrating later life selected by over 40 Irish geriatricians, all proceeds to go to charities supporting older people! Orders from www.emergenceanthology.com 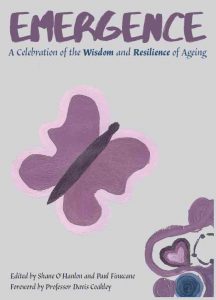